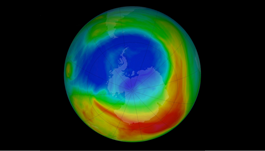 An article just published in the journal PNAS reports for the first time the emissions of three ozone-destroying compounds prohibited by the Montreal Protocol. The finding is based on data produced by a global network of 15 stations including the "Ottavio Vittori" climate observatory of Monte Cimone managed by the CNR Institute of Atmospheric Sciences and Climate. The networking of the measurements made it possible to ascertain that the increase in concentrations of these compounds is due to industrial emissions in East Asia.

A little over thirty years after its entry into force, the Montreal Protocol for the protection of stratospheric ozone, which limits production and use of ozone-destroying gases, is considered one of the greatest achievements of international cooperation, thanks to the broad global membership. As many as 197 countries have ratified the treaty committing themselves to drastic limitations in the production and use of these compounds. However, given the high economic interests involved, it is essential to monitor compliance with the agreements. Continuous measurements of the levels of these gases in the atmosphere is one of the available tools for this kind of control, and this is done through the networking of observers who, within the WMO (World Meteorological Organization), have been measuring atmospheric levels of ozone-depleting compounds worldwide for many years. Among the stations that are part of the global measurement networks is the O. Vittori Climate Observatory, located on top of Mt Cimone, managed by the CNR-ISAC. There, thanks to a collaboration with the University of Urbino, the gases responsible for the "hole" in the stratospheric ozone have been measured for over 20 years.

An article just published in the journal PNAS (https://www.pnas.org/content/118/5/e2010914118) reports the results of a study conducted thanks to the collaboration between researchers from all over the globe (including Jgor Arduini and Michela Maione, University of Urbino, CNR-ISAC associates. For the first time the increase of the global atmospheric levels of three ozone-destroying hydrochlorofluorocarbons, whose production and use are prohibited by the Montreal Protocol, is detected. The networking of global measurements and related modeling analysis made it possible to identify which region of the globe is mostly responsible for such emissions. This turned out to be East Asia where the compounds are emitted as production intermediates of the fluorocarbon industry. This study demonstrates the need to introduce amendments to the Montreal Protocol that tackle unintended emissions, which are currently not regulated.

The usefulness of monitoring activities to assess the compliance with international agreements had already been demonstrated in 2018 by NOAA researchers. Thanks to their global monitoring programme, they suggested a violation of the Montreal Protocol by China, where it was then verified the presence of industrial plants that, since 2013, had started to illegally produce CFC-11. This compound, used as an expanding agent for the creation of polyurethane foams, is highly harmful to the ozone layer. This revelation led the Chinese government to take immediate action against responsible industries. Two articles published in February 2021 in the journal Nature showed that the early warning and the consequent measures taken by the government have been effective; in fact, CFC-11 emissions from eastern China are now declining (https://www.nature.com/articles/s41586-021-03277-w). This is reflected in the global levels of this compound, with the consequent limitation of potential damage to the stratospheric ozone.