A New Method for Hail Detection from the GPM Constellation 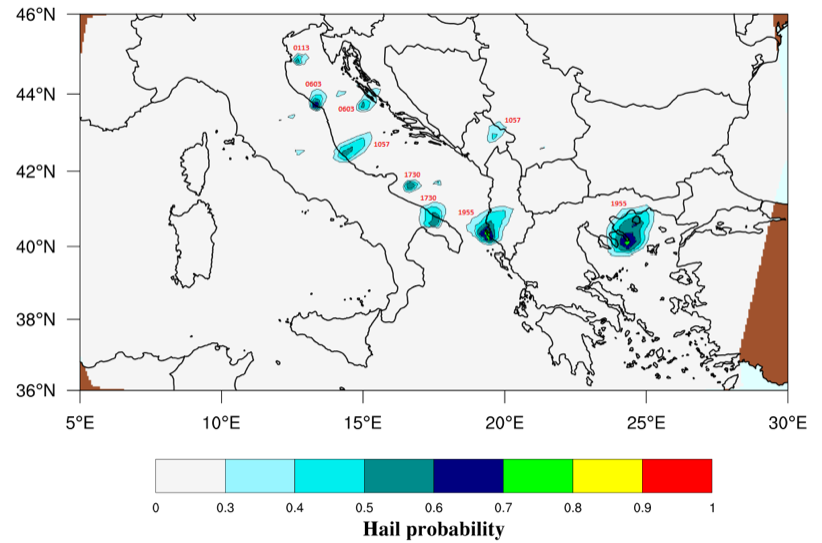 CNR-ISAC researchers, have developed a method to identify the signal-emitted by hailstones inside the storms and monitor the evolution of hail clouds with high temporal rate. The study, carried with the collaboration of US research team of the National Oceanic and Atmospheric Administration (NOAA) and the University of Maryland, will allow to better understand the distribution of frozen hydrometeors inside the thunderstorm improving the current knowledge on the formation mechanisms of hail clouds in a changing climate. The proposed method (MWCC-H) exploits the capability of high frequency microwaves in the range 150-170 GHz to identify the hail signature from the precipitating systems. The strength of this study is having developed the first generalized method able to work with the all high frequency radiometers aboard the Global Precipitation Measurement mission (GPM) constellation.

Conceptually, the approach is based on a Verhulst-type probabilistic growth model, in which the growth of a biological population is self-limited by a series of factors necessary to control the population explosion. The model by evaluating the perturbation induced by the storms to the natural radiation field emitted from the Earth (unperturbed field) detects the scattering signals from the icy hydrometeors by extracting the hail signatures. The signal depression measured to the satellite tends to be distributed accordingly an exponential law as a function of hail size distribution. Uncontrolled growth leads to the explosion of the model (critical or saturation condition). Then, similarly to the biological population, the MWCC-H model is self-regulating through the parameter K (carrying capacity), which controls the growth of the curve until saturation conditions are reached.

Validation results demonstrate the robustness and sensitivity of the method in reproducing hail clouds and distinguishing small areas inside the storms where hail formation mechanisms begin to activate.

The greatest utility of this method is giving the unprecedented possibility to monitor the evolution of hailstorm systems with very high temporal resolution (see figure). The validity of this study is also increased by the opportunity to create a homogeneous database of hailstorm events at the global scale on each type of surface. Such database is an extremely useful tool for improving the current knowledge of the effects of climate change on the formation of solid precipitation and on the space-time location of the most intense storm systems.