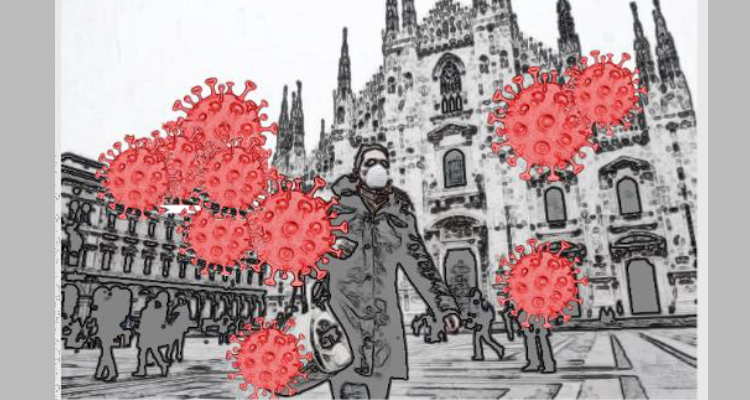 This is shown by the results of a joint study between the Institute of Atmospheric Sciences and Climate of CNR (ISAC-CNR) and Arpa Lombardia. The research, published in Environmental Research, analyzed the concentrations of SARS-CoV-2 in the air in the cities of Milan and Bergamo, studying the interaction with other pre-existing particles.

The first wave of the Covid-19 pandemic, during winter of 2020, affected more significantly Northern Italy than the rest of the country and, especially, Lombardia that was the region with the most intense Covid-19 outbreak. As of May 2020, 76,469 cases had been registered there, accounting for 36.9% of the Italian total cases equal to 207,428. The reason why the geographic distribution of the epidemic has been so uneven is still subject of discussion in the scientific community.

A recent study, conducted by the Institute of Atmospheric Sciences and Climate of the National Research Council (CNR-ISAC), Lecce and Bologna divisions, and by the Regional Agency for the Protection of the Environment (Arpa Lombardia), shows that atmospheric particles and virus-laden aerosol do not interact with each other in outdoor air. Therefore, excluding crowded areas, the probability of increased airborne transmission of the infection in outdoor areas with high air pollution appears to be essentially negligible.

The research, published in the scientific Environmental Research journal, was conducted by analyzing data, during winter 2020, in outdoor environments for the cities of Milan and Bergamo, among the most relevant hotspots of COVID-19 in Northern Italy.

"Among the advanced theories, there is the one that relates viral spread and atmospheric parameters, during poor ventilation, atmospheric stability (typical of the winter period in the Po Valley) and atmospheric particulate matter, i.e. solid or liquid particles from natural and anthropogenic sources, present in the atmosphere in high concentrations during the winter period in Lombardia, may favor the transmission in the air (airborne) of the infection," explains Daniele Contini, researcher of CNR-ISAC (Lecce). "In fact, it has been assumed that these pre-existing particles may act as a vehicle for SARS-CoV-2 by forming clusters with the respiratory emissions of the infected people. In this case, the resulting long-distance transport and the increase of the residence time in the atmosphere of the emitted particulate matter could have promote the airborne spread of contagion".

In this research, the concentrations of viral particles in the atmosphere of Milan and Bergamo were estimated as function of the number of positive people, both in average terms and in the worst case scenario for the dispersion of pollutants typical of the areas under study. "The results in outdoor public areas show very low concentrations, less than one viral particle per cubic meter of air," Contini continues. "Even assuming an infected rate of 10% of the population (about 140,000 people for Milan and 12,000 for Bergamo), about ten times more than that currently detected (about 1%), would be necessary, on average, 38 hours in Milan and 61 hours in Bergamo to inhale a single viral particle. However, it must be taken into account that a single viral particle may not be sufficient to transmit the infection and that the average time required to inhale a viral quantum is typically between 10 and 100 times longer than the one related to the single particle, thus varying between tens of days and several months of continuous outdoor exposure. Therefore, the probability of airborne transmission, outside crowded areas, appears essentially negligible".

"To have, on average, 50% of probability of detecting SARS-CoV-2 in daily samples of PM10 in Milan it would be necessary to have a number of infected people, even asymptomatic, equal to about 45,000 (3.2% of the population) and about 6,300 in the city of Bergamo (5.2% of the population)", underlines Vorne Giannelle of Arpa Lombardia. "Therefore, at the current state of research, the identification of the new coronavirus in outdoor air does not appear to be an effective method of early warning for pandemic waves".

"The likelihood that viral particles in the atmosphere form agglomerates with pre-existing particulate matter, of comparable or greater size, is negligible even under the conditions of high pollution typical of the Milan area in winter," concludes Franco Belosi, researcher at CNR-ISAC of Bologna. "It is possible that the viral particles could form a cluster with nanoparticles much smaller than the virus but this does not significantly change the mass of the viral particles or their residence time in the atmosphere. Therefore, atmospheric particulate matter, outdoors, does not appear to act as a vehicle for the coronavirus”.